An all-members’ survey revealed many found juggling work and the effects of Covid-19 caused stress and anxiety.

They said feelings of isolation, anxiety about losing their job, symptoms of long Covid and higher workloads led to depression and insomnia. Juggling childcare, home schooling and getting work done was taking its toll, with 45 per cent saying they had problems coping.

The fear of redundancy loomed large; almost three quarters (72 per cent) said there had been redundancies at their workplace and 85 per cent believed the continuing crisis would lead to further job cuts. 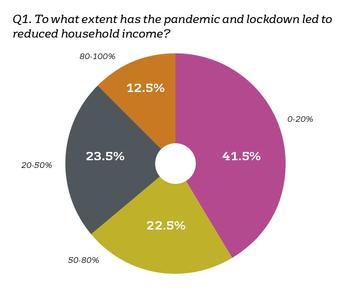 The survey carried out between the end of 2020 and the beginning of 2021 revealed that six in 10 members (61 per cent) said their income had been affected by the pandemic, with 13 per cent losing all their income and more than a third (35.5 per cent) earning less than half. One in six freelances said their work had decreased sharply or dried up completely, with 13 per cent saying their work had increased or there had been little impact.

Compared with a similar survey carried out last spring, there were fewer editorial staff on furlough; 14 per cent compared to 45 per cent. However some staff at JPI Media have been off work since April. Laura Davison, national organiser, agreed members were under strain. "The main issue seems to be the pressure caused by last year's redundancies – people working longer hours, or very intensively and with fewer casuals available to provide cover," she said.

In spring 2020, 42 per cent of those working said they'd had their pay cut, with 71 per cent of the recent respondents now saying they had reverted to their full pay. This time, 30 per cent said they were suffering pay cuts.

Feedback included: "My employer failed to appreciate family responsibilities and has not made any effort to accommodate home schooling or mitigate against my expected outputs or performance." Another said: "It's very difficult to work full time and home school, especially with an unforgiving boss." And: "I have been offered no support and was told to take annual leave or unpaid leave to cover childcare."

A good employer made all the difference: "We're just about juggling but the BBC has been very supportive, allowing us to change hours and work slightly less." Then there was the technology: "It is a struggle now the kids are online all day at home. We cannot increase the bandwidth owing to the age of cabling/ distance from the exchange." Others found it difficult to edit and record audio with the dog barking and family interrupting.

Working from the office

One in five said they were not always able to socially distance and a third were not confident that adequate cleaning was taking place. Comments included: "We hot-desk computers for shifts – someone may have got up 15 minutes before we take their seat. We are supposed to wipe down all equipment before and after each shift, but not everyone does.

Shared equipment includes a headset with microphone." And: "Everything is there in theory but often they don't have wipes or sanitiser and many colleagues ignore the one way systems as they are not enforced by managers." Lack of ventilation was also common problem.

Of those who took part in the survey 8 per cent said they consider themselves to be disabled, with eight in 10 saying they had not had reasonable adjustments organised through their workplace since Covid-19. While Zoom and other packages allowed communication, events and online conferences, one member reported that not all platforms were as good as others for people who need assistive technology.

The survey was carried out between the end of December 2020 and January 2021, with 840 respondents.

NUJ extra is the charity for the National Union of Journalists (NUJ). As an NUJ member, that makes it your union charity.