How to fund the desire for quality Welsh news 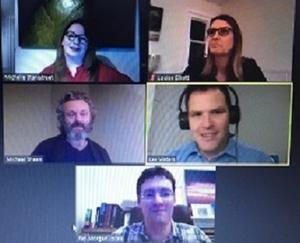 Journalists were recognised as key workers, essential public servants relaying vital information to the public as Covid-19 gained its grip on the globe. The BBC and ITV excelled as public service broadcasters providing trusted news and holding governments dealing with the crisis to account.

But the press, long-hollowed out by proprietors who have prioritised profits and failed to invest in journalism, was exposed, she said. It has left some newspapers local in name only. The UK's jurisdictions ran their own policies and rules in combatting the virus, but many Welsh newspapers were left red-faced after running government-funded adverts with health advice aimed at an English audience.

The media also suffered during the crisis with titles going bust including the Gem series in the Vale of Glamorgan and Bridgend County Borough. BBC Wales faces a budget cut of £4.5m this financial year, with 60 posts to go by April 2021. ITV's advertising income fell by 42 per cent earlier this year and its capital spend is to be cut by £30m with programme budgets cut by £100m.

That's why, said Michelle, the NUJ published its News Recovery Plan, a set of practical plans and interventions to help the industry in the short-term and policies to meet the long-term challenges of creating a more diverse, plural media with public service journalism at its heart.

From Health Crisis to Good News

The town hall meeting brought together a panel of Michael Sheen, actor and local news activist, Lee Waters, deputy minister for economy and transport, Ifan Morgan Jones, a lecturer in journalism at Bangor University and editor of the news and current affairs website Nation.Cymru, and Louise Elliott, programme and digital editor at ITV Cymru Wales, to see how the recovery plan could be adopted in Wales.

The plan calls for a tech giants' windfall tax of 6 per cent and then a levy based on profits imposed as part of a Digital Services Tax to fund public interest journalism; the establishment of a Welsh Journalism Foundation (at arms-length from the government) to invest in local news and innovative journalistic projects; asset of community value status to be conferred on local newspapers (like pubs) ensuring titles are preserved; tax credits and interest free loans to support Welsh media jobs; a national media literacy programme with vouchers for young people to purchase newspapers/news subscriptions; and support for freelance journalists.

It was Michael Sheen's experience of the media in his hometown of Port Talbot that led him to become a passionate advocate of quality local journalism and he has been working in collaboration with journalists, media academics, Cardiff University and the Centre for Community Journalism to work out a way for local news to pay its way.

He recalled when the town had five local newspapers and more than 20 reporters. Today Port Talbot has one, who is part-time and based at Swansea.

"There are three things needed for a healthy democratic ecosphere: active and trustworthy newspapers; for the local community to feel its voice is represented; and for those in power to be held to account. When journalists are not embedded in their community, the voices you hear are those of high-status quoted from press releases."

Michael said the journalists are there, people with an intimate knowledge of their locality and a network which can produce quality journalism. Many of them are already working on hyperlocals.

"The question is," he said, "is how to monetise this expertise and find alternative forms of revenue. I want to support, celebrate, expand and connect these local networks in a more powerful way and possibly set up a pan-Wales entity which grassroots journalism can feed in to."

Ifan Morgan Jones is editor of Nation.Cymru, a news and current affairs website set up three years ago, which is a not-for-profit, funded by advertising and donations. It regularly reaches an audience of around half a million users a month in Wales and the Welsh diaspora across the globe.

He said there was a great appetite for Welsh news and demand for quality journalism. But it was a problem of supply. Cuts to journalist posts and mergers of titles have resulted in a reduced and often poor offering. He said there was a solid case for public subsidy of news.

He said money should be given to journalists sitting in the Senedd and reporting on the devolved areas, such as health, education, economic development, transport, the environment, agriculture and local government.

"The Welsh Parliament has huge and increasing powers over our lives," he said, "but reports have shown that half the population had no idea education was devolved. There is no reason why public subsidy cannot be used to fund a media for the people of Wales and for the benefit of the Welsh."

Louise Elliott, programme and digital editor at ITV Cymru Wales, agreed that there was a demand for local news, with the viewer figures of Wales at Six higher than ever before. She left school aged 16 and has worked in journalism for 30 years and believes it is important that local people are telling their stories and reporting the news. She said:

"We need to find more talent from our local communities and tap into that talent by accelerating our inclusivity and diversity strategies and opening up training."

ITV has recently taken on two digital journalists as apprentices from "non-traditional backgrounds".

Contributions from Lee Waters got the Zoom chat function buzzing among the almost 70 who attended the town hall event. While singling out a couple of hyperlocals for praise, he said he didn't know anything about Wrexham.com and referred to many hyperlocals as hobbyists – angry men with keyboards carrying out vendettas.

The Centre for Community Journalism's Matt Abbott responded saying such tired cliches were "the reason the hyperlocal sector doesn't receive the support it requires".

"Wrexham.com is run by two full time journalists, who are working around the clock to serve the residents in Wrexham."

But they and the likes of Llanelli Online were not on a level playing field with traditional legacy press, such as the Llanelli Star, which has access to government advertising spend and statutory notices, she said.

The minister said that nobody read statutory notices and anyway they should all go online, while admitting that this would leave local newspapers without a lucrative revenue stream. He did say that he did see a role for public funding of journalism and referred to an idea once floated by the Senedd's culture committee of setting up a wire service for government news.

During a Q&A session, the minister disagreed with Michael's view that tackling unpaid internships was a priority. The former journalist said that work experience was a great benefit to him when he was starting out. Michelle replied that there exists a significant difference between well-run, short work experience placements that allow aspiring journalists to get a taste of working life, and long-term unpaid internships that exploit young people's aspirations and desire for a job, and act as a barrier to many – to which the minister said, "fair point."

"Unpaid internships ARE a reality and ARE a huge barrier for social mobility for working class young people."

The many and varied contributions made at meeting and ideas shared will be used by the Welsh Executive Council to inform its final version of the Welsh News Recovery Plan.

Summary of the proposals for the Welsh government from the NUJ's News Recovery Plan.