DM2021 5PM Talk-In: Journalism under attack, the unions fight back!

"I'm talking to you while inhaling the gas fired by the Israeli army," said Nasser Abu Bakr, president of the Palestinian Journalists Syndicate.

"I'm talking to you at a time when journalists are under attack and fire because of the Israel war on the Gaza Strip and the West Bank. Today the Israelis killed our fellow colleague, Yousef Abu Hussein, and they left his children orphans. All these crimes must stop. We are in dire need of international effort to highlight the crimes and the violations committed by the Israeli occupation against the Palestinian journalists."

The NUJ supported the IFJ's call on the United Nations Security Council to take urgent action to stop the deliberate and systematic targeting of journalists in Gaza. Buildings housing media companies, including The Associated Press and Al Jazeera, have been destroyed by Israeli bombs and journalists have been attacked or detained and internet services blocked.

Jeremy Dear told the meeting the IFJ had submitted a formal complaint to the UN and is also seeking the right to pursue a case of Israel targeting a Palestinian journalist at the International Criminal Court. He thanked the NUJ's Parliamentary Group for its early day motion condemning the attacks on journalists covering the conflict. 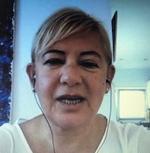 Also on the panel was Ayşe Düzkan, well known to NUJ members, who was "adopted" by the union after being sentenced to 18 months by the Turkish authorities for fighting for media freedom at the Kurdish newspaper Özgür Gündem. NUJ branches and members sent letters to her İstanbul prison.

"Well, there are 40 journalists at present jailed in Turkey," she said, "the names and the numbers constantly change as one person goes in and one goes out, and another in, and so it goes on."

She said a new law forbade anyone, including citizens, to record any kind of violence by the police and soldiers against demonstrators on the street. "So, if they beat someone up and take them into custody, you cannot take a photograph or video. We are also banned from writing about the war in Syria, the Kurdish conflict, government corruption and political conspiracy."

She described how the police raided newspapers and broadcasters and turned equipment into dust to prevent journalists moving on and starting again. This is why, she said, it was so important to get international support, not just from Europe, but from Asia, Africa, India and Palestine.

The situation faced by journalists working under the increasingly authoritarian regime of Narendra Modi's Bharatiya Janata Party was described by Sabina Inderjit, general secretary of the Indian Journalists Union. She said:

"Journalists across the country are facing intimidation and harassment by a government which has become very intolerant to criticism. Reporters and photographers were attacked and arrested for covering the farmers' protest earlier this year. It is the worst In Kashmir where there has been a complete communication clampdown, with the internet blocked for over a year. That was the darkest time I have ever gone through."

Her union has protested about every journalist's arrest and raised its voice against injustice, including taking the clampdown and attacks on press freedom in Kashmir to the Supreme Court, together with the Kashmir Times executive editor, Anuradha Bhasin.

The IFJ has used its annual end-of-year Killing List to highlight every media worker's death each year. On Wednesday 19 May, the tally was 14 – to be updated.

"When you aggregate the statistics, they add up to about two journalists every week. Most of these are not the so-called glamorous war correspondents, they are the local, beat reporters, whose names do not resonate internationally, just caught up in the conflicts and crossfire. What is equally shocking is the scale of unresolved journalist murders; with no successful prosecutions in nearly nine in 10 cases."

The IFJ also intervenes practically. It funds the training of thousands of journalists and its safety fund provides assistance to media workers needing medical attention, legal fees or to support their family if they are injured or killed. The federation patiently lobbies global bodies such as the United Nations to strengthen international laws to protect journalists.

Sakeus Iikela is secretary general of the Namibia Media Professionals Union, founded only last year, and the IFJ's newest affiliate. He has been leading a strike over the government cutting its funding to Namibian Broadcasting Corporation. His members are demanding better working condition, better pay and improved equipment and have just had their case heard by the High Court of Namibia.

Last to speak was Jon Schleuss, president of The NewsGuild, part of the Communications Workers of America, which represents 25,000 members in about 300 media organisations in America and Canada. Recent times have been tough for journalists, and not just because they were dubbed the enemy of the people by the former president, Donald Trump.

Even under Joe Biden, police target them when they cover disturbances and protests and, since the 2008/9 recession, half of the jobs at newspapers across the United States have gone. The good news is there has been a renaissance in union membership and from Wyoming to Los Angeles and Chicago to Texas, journalists have been signing up with the NewsGuild in big numbers.

"Journalists are organising to safeguard jobs and use their voices to seek truth and report what is happening in our world and to minimise the harm and pain inflicted on our colleagues when they are paid less because of the colour of their skin.

"We're organising because our market is rapidly consolidating, with just a few corporate players controlling almost all of media, and – even worse – being controlled increasingly by hedge funds that just want to extract wealth and not actually invest in the work we do.

"Our goal is to organise every single worker in the States and Canada. I know we can do that and take that fight to an international level as well."