In Remembrance of Lyra

Politicians, NUJ members and others remember Lyra McKee, killed while reporting in Derry.

At the front of St Anne's cathedral, Belfast, sat Theresa May, Michael D. Higgins and Leo Varadkar, all there to pay tribute to Lyra McKee, the 29-year-old journalist killed by the New IRA while reporting events in Derry on Thursday 18 April.

Members of the NUJ in Ireland formed a guard of honour as the service for their murdered colleague began in Belfast and people outside the cathedral applauded as the coffin was carried in. In Derry's Guildhall Square, crowds came together and applauded.

At St Bride's in Fleet Street, the journalists' church, 29 candles were lit for each year of her life and members read poems and Lyra's work. People queued to sign the book of condolences.

"She attempted to make sense of the world, and she did so with a firm belief in the value of her words and in the power of her storytelling. In Lyra, we've lost a brilliant, young, working class, lesbian woman journalist, a member of the National Union of Journalists, who had a bright future ahead of her. But while we're shocked and saddened, we are also inspired. As an industry and within my own trade union, we can do more to inspire those who have a story to tell and be more open to voices we haven't heard before."

NUJ staff joined NEC member, Tim Dawson, and the Bureau of Investigative Journalism's Meirion Jones and colleagues outside the union's London office for a one-minute silence.

Meirion said: "I knew Lyra, she was quirky and full of fun. She was full of questions and good at digging away." He said he had re-read her letter to her 14-year-old self and collapsed into tears. She wrote that letter in 2014 about being gay and her future in journalism.

NUJ Glasgow branch organised a vigil on the Buchanan Street steps, with LGBT Health and Wellbeing. Layla-Roxanne Hill, writer and national executive member for Scotland, said: "Lyra was a campaigner for LGBT rights, an active and passionate member of the NUJ and a believer that journalism is a force for good and a vehicle for change."

She quoted Sara Canning, Lyra's partner, saying while the senseless death had left a family without a beloved daughter, a sister, an aunt and a great aunt and the women she had planned on growing old with, "her legacy will live on in the light that she has left behind".

Scottish organiser John Toner read the first verse of Shelley's Adoniais and the crowd of mourners heard from John Loughton and Shaun Alexander, friends of Lyra.

From the Orkneys to Cornwall to Limerick, NUJ members and others held one minute's silence for the young investigative journalist, author and LGBT activist, and for all those journalists who have written about rights and freedom and paid for it with their lives. Lyra's death occurred while she was standing next to police during disturbances on the Creggan estate in Derry on 18 April when a gunman opened fire on the officers and she was hit. 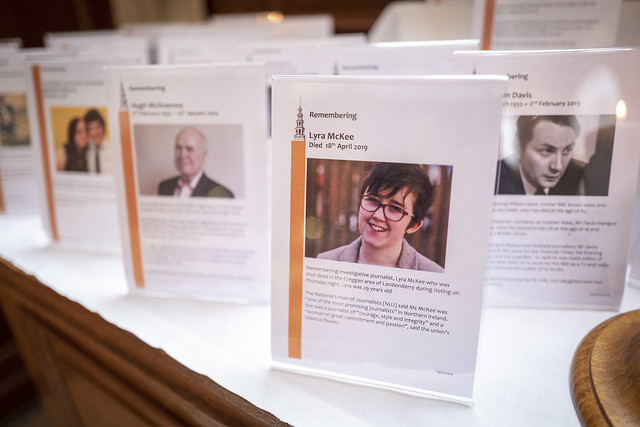