The sharing of joy

The journalist Claudia Jones is also known as one of the founders of the world-famous Notting Hill Carnival which succeeded the Caribbean Carnivals she organised in London in the late 50s and early 1960s. 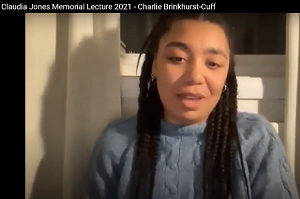 They were, explained Charlie Brinkhurst Cuff, a response to racist violence and riots that swept through Britain in the summer of 1958, and more specifically, the murder of Kelso Cochrane.

Quoting biographer, Carole Boyce Davies, who said: “Jones clearly felt that Caribbean traditions had much to offer the world in terms of creating a culture of human happiness over the ignorance and pains of racism, and indeed it was a people’s culture that provided them with the basis for acquiring their freedom,”  Charlie added: “I believe that finding happiness, finding joy, as Black journalists must become a fundamental part of our practice — just as it was for Claudia Jones, who among other accolades, was a journalist & editor who created the West Indian Gazette.”

Charlie Brinkhurst Cuff is one of the senior staff editors at The New York Times, the former editor-in-chief at gal-dem magazine and a winner of The Guardian’s Georgina Henry Award for Innovation in Journalism. In her Claudia Jones Memorial Lecture, she painted a picture of the ‘glamorous, vivacious, and just slightly eccentric’ woman who loved to go to parties, to drink and smoke and chat and who understand ‘how important it was for there to be spaces for both individual and collective joy to be found within the Black community in the UK’.

Charlie said that while Back journalists must hold truth to power, especially when it comes to issues of racism and prejudice against people of marginalized backgrounds, like Claudia Jones, ‘the woman with the big heart, who laughed a lot, who was messy and slept on a bed made from books, who brought joy to those around her and sought it out too, we must look for joy as a form of resistance and resilience as we continue our vital work’.