NUJ statement on the anniversary of George Floyd’s murder

The union’s Black Members’ Council said his death must lead to changes in policing, politics and culture. 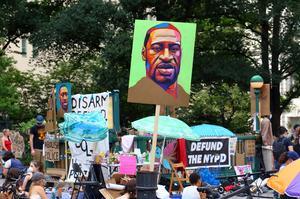 On the anniversary of the murder of George Floyd in the US, which sparked worldwide outrage and mobilised the #blacklivesmatter protests, his tragic death continues to bring into sharp focus injustice and racial inequality.

"Commentators have said the jailing of Derek Chauvin for murdering George Floyd was an important step in reversing previous police immunity when they killed a black person. We must ensure there are long-overdue changes in policing, politics and culture, including journalism, that follow in America and Britain, aimed at tackling the systemic racism and unconscious bias that daily affect black people."

The government’s Commission on Race and Ethnic Disparities Report, also known as the Sewell Report, and its denial of institutional racism within the UK was widely criticised and was said to undermine and downplay the lived experience of people who are affected by racism.

The report and its backdrop the Covid-19 crisis, which has had a disproportionate impact of the pandemic on Black or African Caribbean and Asian communities, raised a red flag regarding the general health and living conditions of these groups and highlighted issues of mistrust and disparity within deprived areas.

It was in these cramped and unsafe living conditions that 72 people lost their lives in the Grenfell Tower disaster. The charity Shelter has highlighted government data of June 2020 that showed 12 per cent of Black or African Caribbean and Asian households live in overcrowded homes in London, compared with 3 per cent of white households. These conditions are also believed to contribute to the higher level of contagion and deaths amongst people with ethnic minority backgrounds from Covid-19.

The NUJ is encouraging members to get involved in the TUC’s week of action.

The NUJ’s Delegate Meeting has committed the union to stepping up campaigning against racism in the media and supporting members fighting racism in workplaces and giving confidence to colleagues to report racism.