International Day for the Elimination of Violence against Women 2021

Violence against women and girls is one of the most widespread and devastating human rights violations in our world today. 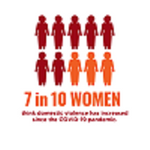 A report published by UN Women shows that COVID-19 has intensified violence against women with one in seven women saying domestic violence has increased during the pandemic. Two in five women said that COVID-19 has worsened their overall mental and emotional health. Domestic abuse takes many forms,  from overt physical or sexual abuse to psychological abuse, coercive control and financial abuse. It is caused by gender inequality and is often hidden from view, making it hard to identify and seek support.

On average, a woman in the UK is killed by a man every three days. Internationally, everyday 137 women are killed by a member of their family.

One in four women in Ireland who have been in a relationship have been abused by a current or former partner. 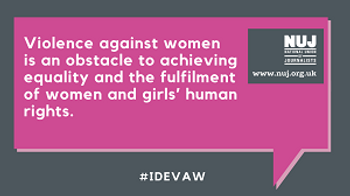 Digital abuse can include:

Eliminating VAWG is a collective and trade union issue. The NUJ::

The NUJ Equality Council supports the work of the wider union on gender equality through an intersectional approach. 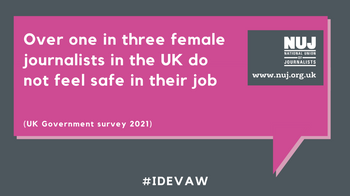 We welcomed the UK’s ratification of the ILO’s Violence and Harassment Convention which now provides great protection for women at work, including from third parties.

As a trade union, the NUJ stands in solidarity with women and girls around the world, who experience violence in many forms. Women journalists live with the constant risk of harm – The treatment of women journalists in Afghanistan will also be fresh in our minds as many tried to flee or have gone into hiding as the Taliban has cracked down on women’s rights. Afghan girls have been prevented from going to school. We continue to support the work of the IFJ in bringing women journalists to safety. Donate to the Afghan Safety Fund.

Other forms of violence against women and girls include:

Violence against women continues to be an obstacle to achieving equality and the fulfilment of women and girls’ human rights.

What you can do:

Support
If you are experiencing financial hardship as a result of domestic abuse you can get in touch with NUJ Extra to seek support, either directly or through your branch Welfare Officer. 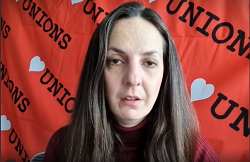 Natasha Hirst, NUJ vice president and domestic abuse survivor, explains how union activism helped put her life back on track, including her work as a freelance photographer

The NUJ contributed towards the development of the Zero Tolerance media guidelines and resources for journalists who report on violence against women and we encourage all to take the time to read and use the resources.

The Femicide Census collects the numbers of women who have been killed in the UK and the men who have killed them. The killings of Sarah Everard, Bibaa Henry and Nicole Smallman were deeply shocking, but the vast majority of women are killed by someone they know within the domestic sphere.

Women media workers also need to make sure they are safe during their domestic and working lives.  NUJ is a member of the government's National Committee for the Safety and Protection of Journalists and is working on an action plan to prevent violence against media workers. Over one in three female respondents to a government survey. (November 2021) said they do not feel safe operating as a journalist.

A TUC report showed that 7 in 10 disabled women workers have experienced sexual harassment.

DART Centre for journalism and trauma: