International Day for the Elimination of Violence against Women 2020

Good reporting can play a vital role in increasing understanding of violence against women and by holding governments to account for their responses to the issue. 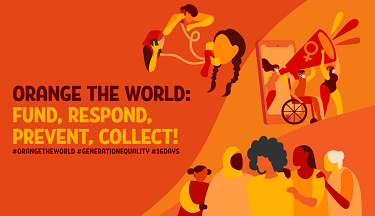 Even before the Covid-19 pandemic, 243 million women and girls globally were abused by their intimate partners in the past year. Since the pandemic, with lockdowns measures, countries around the world have seen an alarming rise in reporting on violence against women, especially domestic violence.

António Guterres, the UN secretary-general, has called for a "cease-fire at home" and earlier this year urged governments to make the prevention of violence against women and girls a key part of their national response plans for Covid-19.

November 25 is the 2020 International Day for the Elimination of Violence against Women and will start 16 days of activism under the theme Orange the World: Fund, Respond, Prevent, Collect! The UN has proposed 10 ways you can help end violence against women, even during a pandemic. You can follow the action and news about events on #orangetheworld and #16days and follow @SayNO_UNiTE and @UN_Women on Twitter.

"As a journalist and survivor of domestic abuse, my union colleagues played a role in supporting me to get my career and life back on track after I moved on from refuge. Affecting one in four women at some point in their life, a significant number of our members will also have experienced domestic abuse. I would encourage branch and chapel reps to raise awareness with employers to ensure that domestic abuse policies are in place and to know where to signpost members who need support."

It is crucial journalists covering stories of women whose lives have been harmed or lost through violence do so accurately and with sensitivity. Good reporting can play a vital role in increasing understanding of violence against women, challenging its place in our society and by holding governments to account for their responses to violence against women. The UN provides a useful FAQ on the types of violence against women and girls and the key terms that any gender equality activist or reporter should have in their vocabulary toolkit.

The NUJ contributed towards the development of the Zero Tolerance media guidelines and resources for journalists who report on violence against women and we encourage all to take the time to read and use the resources.

Women media workers also need to make sure they are safe during their domestic and working lives. The NUJ is a member of the government's National Committee for the Safety and Protection of Journalists and is working on an action plan to prevent violence against media workers including women and has carried out a survey and report for the committee:

Figures compiled by the UN