NUJ members urged to support the journalists whose wages have been hit hard by inflation.

Journalists at BBC Turkey in Istanbul are striking after talks failed to reach an agreement on pay – as wages have been hit by rampant inflation in Turkey.

“For the past six months, we have explained to the BBC how the economic turmoil has melted the staff’s salaries. Inflation and the rising cost of living have caused a significant blow to purchasing power. Our demands under these deteriorating economic conditions are realistic and humane.

“The Turkish Statistical Institute announced inflation as 36 per cent in 2021, though independent economists put the figure as high as 82 per cent. The BBC’s final offer of a 20 per cent increase in pay during the talks will therefore not sufficiently address the meltdown in the staff’s wages.”

The journalists said they were being discriminated against:

“We do not accept that journalists in Istanbul, who are proud to work for the BBC, are refused a number of fundamental rights that are standard market practice in Turkey. We see as discrimination the lack of recognition of some rights for Istanbul staff that are granted to BBC journalists in the UK and many other BBC bureaus.”


The journalists asked for support and solidarity from BBC colleagues and members of the NUJ.

“Until we receive a fair offer, this strike banner will remain here, and our strike observers will be on watch every day. Our demands are reasonable and can be met by the BBC. We have the right to expect a fair offer, acknowledging worsening conditions on the ground and respecting the rights of employees. We will once again show that journalists are strong when united,” they said.

“We are aware of the enormous impact on your members of the economic crisis in Turkey. Over the past six months you have tried without success to secure better terms and conditions of employment for your members, journalists who work so hard in extremely demanding conditions. With inflation out of control and the collapse in the value of your currency your Turkish unions are fighting hard to ensure that workers earn enough to feed their families and pay their bill.

“Be assured of our full solidarity and support.  In doing so we call on the BBC to make a realistic offer which recognises the dire situation in Turkey at this time.” 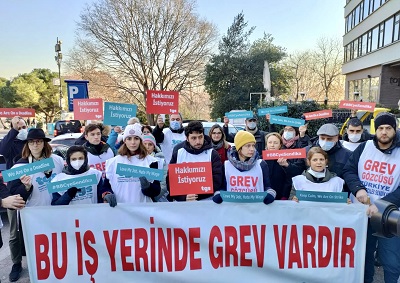