Fixing the safety net: Next steps in the economic response to coronavirus

This report sets out what the government must now do to protect jobs, provide proper sick pay for all and protect the livelihoods of those who lose their jobs. 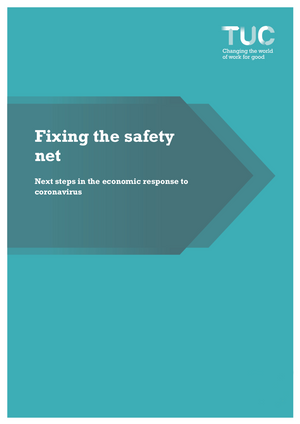 The last few weeks have seen an unprecedented change in the economic situation of the UK. Since the Prime Minister announced a full ‘lockdown’ on the 23rd March, economic activity in the UK has been rightly restricted in the service of protecting public health.

The TUC has clear priorities throughout this crisis. First, to ensure that public health is protected. Second, to protect workers’ jobs and livelihoods.

Following calls from the TUC and unions the government has announced welcome schemes to try to keep people in work. Protecting jobs must be the first step to protecting incomes and ensuring the country can get back on its feet when the crisis subsides. We set out further steps to improve these schemes below.

But there is still more to do to ensure everyone who is sick gets the income support they need and support the livelihoods of those who do lose their jobs.

Our safety net has been dramatically undermined after years of underinvestment. The UK has avoided mass unemployment since the recession of the early 1990s, and the devastating unemployment of the early 1980s. Those experiences left deep scars, which we are still seeing the legacy of today. It is vital the government does everything it can to keep people in work now.

The UK system also compares poorly to the support provided internationally. In most European countries, unemployment benefits are related (at least in the initial period of unemployment) to previous wages to cushion income shocks, ranging from 60 per cent of previous wages in Germany to 90 per cent in Denmark.

This report sets out what the government must now do to:

Fixing the safety net: Next steps in the economic response to coronavirus