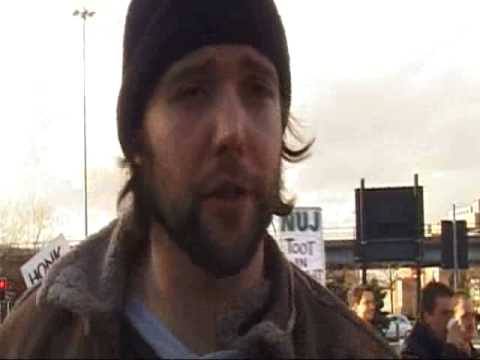 Journalists are picketing the Yorkshire Post building in Leeds today after management said they wouldn't be allowed to hold a union meeting on the premises.

NUJ members were due to hold a meeting at 7am as the latest step in their campaign against job cuts. They convened on the pavement instead.

Journalists at the Yorkshire Post, Yorkshire Evening Post and Leeds Weekly News had been due to hold a union meeting at noon on Thursday.

Todays action is the tenth day of picketing at the Johnston Press company's headquarters on Wellington Street in Leeds. The next strike action is scheduled for tomorrow and Wednesday.

The strike was solid for its ninth day on Wednesday of this week. Some pickets visited Scarborough and addressed a meeting of their fellow Johnston Press journalists outside the offices of the Evening News.

"Oddly, the company seemed cross that our members decided to work on Thursday. If they were prepared to invest in journalism rather than strikebreaking this dispute could be settled straight away."

Chris Morley thanked the trade union movement in Leeds for their support during the strike:

"Its been fantastic with other unions bringing banners to the picket line and collecting money for the strike fund. The PCS civil service union have even let us use their building."