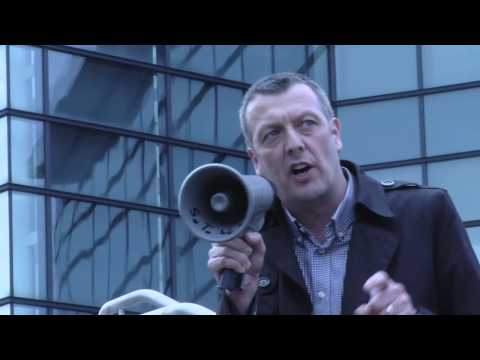 NUJ negotiators are due to meet senior executives of the Daily Record and Sunday Mail in Glasgow today following a solidly-backed wave of industrial action against compulsory redundancies at the Trinity Mirror-owned titles.

Union members are returning to their desks after three days of strike, which began last Friday with a rally addressed by Members of the Scottish Parliament (MSPs) and Jeremy Dear, NUJ General Secretary.

The latest round of industrial action followed a week of strong political backing, with resolutions supporting the strikers from the spring conference of the governing Scottish National Party, the Scottish TUC and two debates at the Scottish Parliament in Edinburgh. A large majority of MSPs backed the call for urgent talks between management and union reps before any compulsory redundancies are enforced at the Glasgow papers.

"In the past, politicians and government have often attempted to duck these issues, to say 'this is a matter for unions and management'. But the Scottish Parliament has now said 'this is more than that; this is about iconic titles for the Scottish people'."

"There's huge support within the [SNP] parliamentary group, because if a company like this – which is making £400,000 a day – gets away with this now, then it pushes the door open for other companies to do the same and that's worrying during a recession when we really need to keep people in jobs."

NUJ members at the papers have now held a total of seven days of strike action to resist plans to impose 24 compulsory redundancies. A further industrial action ballot is under way over the introduction of a new technology system and drastic changes to hours and other conditions of working in proposals to merge the two titles.

The NUJ is also preparing a series of possible legal challenges to the selection process and lack of notice and consultation over the redundancy process.