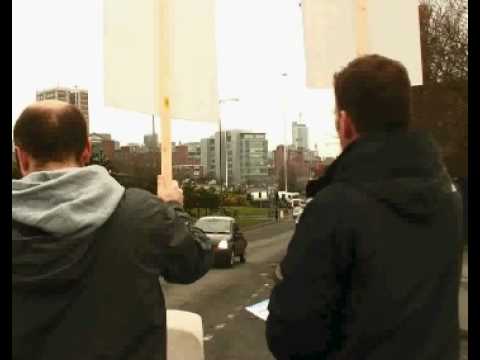 The Yorkshire Post and Yorkshire Evening Post newsrooms were deserted today as NUJ members continued their fight for jobs and quality journalism. A strike by the vast majority of journalists on the titles has been solidly observed.

More than 150 people attended a Leeds rally in the afternoon with dozens on the picket line throughout the day. The action marked the start of a four-day strike over job cuts.

NUJ members have walked out over attempts by management at the Johnston Press-owned titles to force through redundancies. Read the strikers' blog.

The strike is being observed by union members right across the journalistic workforce, with senior editorial figures joining their colleagues on the picket lines.

This afternoon Michelle Stanistreet, NUJ deputy general secretary, and Pete Lazenby, father of Yorkshire Post Newspapers chapel, addressed crowds outside the papers' Leeds HQ. They were joined by local politicians, trades councils and other community representatives in their protest against the damage being done to quality journalism at the titles.

"It's amazing to see just how much support our members are getting from everyone here in Leeds and beyond. It is clear that Yorkshire men and women really value their local papers and don't want to see them suffering at the hands of a company that has consistently put profit ahead of quality journalism."

"Our newspapers are suffering because of a financial mess which is of management's making. It paid out hundreds of millions to shareholders while borrowing hundreds of millions to expand. It now has debts of £465m and yet is valued according to a share price at less than £80m. We didn't create this mess. The management did, yet we are expected to pay for their mistakes."

On the picket line, journalists' spirits were high as members of the public backed the strikers. Throughout the day, passing cars, lorries and busses have been honking their horns to show their support. Messages of support have been flooding in from journalists across the NUJ and the local community.

The BBC has also produced a video report on the strike.

In addition to ordering large quantities of material from PA, the union understands that the company has been forced to bring in editors from other Johnston Press titles in an attempt to cover work on the paper.

"Support for the strike has been rock solid. Members have been on the picket lines since early this morning and we've been getting lots of support from the public.

"Today's strike will culminate this afternoon when we expect over a hundred supporters, both journalists and members of the local community, to come out to back our action.

"The chapel is sending a clear message to management that journalists are steadfast in their determination to defend jobs at the titles."

The strike will continue until Sunday. A further four-day strike is scheduled to begin on Thursday 26 February.

Journalists at the Johnston Press-owned Derry Journal are also balloting for industrial action.