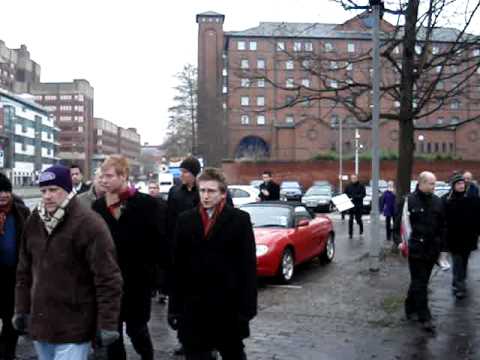 Around 100 people gathered outside the Yorkshire Post offices in Leeds to show the new chief executive that they are passionate about the future of the paper.

The lively protest was organised to coincide with the visit of John Fry, the new head of Johnston Press, at the Leeds centre today. It aimed to send a clear signal that journalists on the papers and the local community will make a stand to defend quality journalism.

About 80 members of the NUJ chapel joined local politicians and supporters from other NUJ branches and trade unions.

Pete Lazenby, NUJ father of the chapel, said at the protest:

"I'm delighted to see so many people here. It's a great welcome to John Fry on the day he makes his first visit to the company. We're fighting for our jobs, but also for our papers. The cuts the management propose are destroying the quality of our papers and making it impossible for us to provide a proper service."

The papers' offices stand on a busy road on the outskirts of the city centre where cars, lorries and buses all showed their support by tooting their horns. Passers-by were handed leaflets explaining the challenges faced by journalists in understaffed newsrooms.

Twenty editorial jobs have been left unfilled at the Yorkshire Post and Evening Post. Printing has been moved out of Leeds ending centuries of tradition.

Steve Hart from the York, Tyne and Humber region of the Unite GPMU section was also at the event. He said:

"An attack on trade union colleagues is as much an attack on Unite as it is on the NUJ. The pay freeze that the company has imposed affects us all.

"I was born and bred in Leeds and my local paper has been printed here for more than 100 years. To move it out of the city and to cut back on the journalists who work for it is like a loss of our identity."

"I notice that the cost of the newspaper has gone up while your pay is being frozen. The newspaper is a really important part of life in Leeds because everybody doesn't have a computer and for them the local paper is their number one source of news about the world, not just the city."

"It's of great concern to people in the city that the Yorkshire Evening Post could suffer a loss of reputation in any way. It's absolutely crucial that elected councillors are held to account by a local paper. It's part of our democracy."

"Leeds is an important European and international city and it needs to have an efficient and effective media news service. It is tragic that things at the local papers have been run down so far. The deadlines on the Yorkshire Evening Post are now so early it is ridiculous.

"I used to be able to attend an event in Brussels ring the news desk and have it published that afternoon. Not any more."

"We've seen phenomenal support and solidarity and have let John Fry know just how passionate everybody who works for him in Leeds is about the titles that they work for. He should be proud of them rather than attacking them."