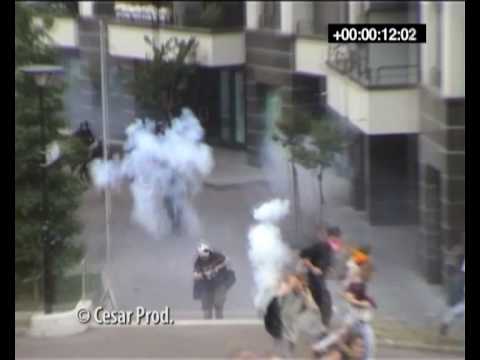 The NUJ has released video and photographs that show a British photojournalist being blown up by a stun grenade thrown by a Geneva police officer.

The material will form part of an appeal by photographer Guy Smallman against a Swiss court ruling that police were not to blame for the injuries he suffered while covering protests outside a G8 summit in June 2003. The appeal is to be formally lodged with Swiss authorities this week.

In the video, Guy is seen running from a group of police officers throwing the grenades – similar to those used by the SAS to storm buildings. One of the grenades explodes on his leg.

In slow motion, the small bomb can be seen falling from above Guy's head and landing by his leg.

Another piece of footage shows a Geneva policeman throwing a grenade into a group of peaceful protestors.

The photographs show Guy lying injured and the horrific wounds he suffered. One picture clearly shows the exposed bone. WARNING: These images are extremely graphic.

Guy Smallman, aged 37, from south London, has permanent damage to his left leg. He has attended over 100 related doctor and hospital appointments since June 2003 and has regularly been unable to work due to muscle strains related to the injury.

A court ruled in January 2007 that the State of Geneva, which runs the police, was liable for his injury. However, the state appealed and last month another judge ruled in their favour. Guy Smallman must now take his case to the federal court, the highest judicial body in Switzerland.

"Anyone who sees the video will find it hard to believe the latest court ruling that police were not responsible for Guy's injuries. He was clearly running for cover when the grenade was thrown at him.

"It is totally unacceptable that journalists covering protests should be attacked in this way."

"The initial case proved categorically beyond all doubt that the police broke their won guidelines for how to use these grenades.

"In the appeal they moved the goalposts in their favour. I am amazed that a court in a country that describes itself as a cradle of peace and democracy can rule that it is acceptable to throw high explosives at working journalists as they run away.

"The police have never been investigated for their actions – nor have they been held to account for the blatant lies they told when this legal process first began – claiming I was injured by the protestors and not them."