NUJ members at Newsquest Cheshire and Merseyside on strike 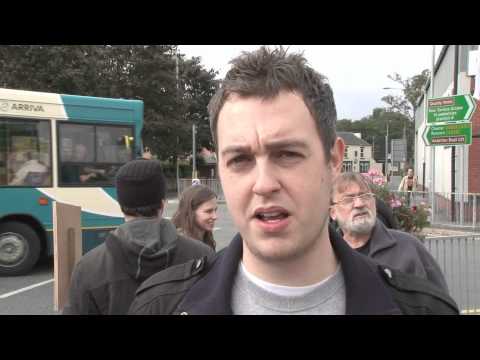 NUJ members at Newsquest Cheshire and Merseyside have taken strike action today in response to Newsquest's announcement to make five compulsory redundancies across the division.

The division is based in Warrington with several satellite offices. After the first day of action, the Chapel will start an indefinite work-to-rule followed by another day of action on Tuesday 20 September.

There are more than 40 NUJ members involved in this dispute and the strike action will impact on the Warrington Guardian, Northwich Guardian, Sale and Altrincham Messenger, St Helens Star and The Wirral Globe.

NUJ members are calling on the company agree to talks and suspend the redundancy consultation to allow agreement to be reached on the way forward.

The union is calling on the company to suspend the implementation of seven redundancies to create the space and time for constructive talks.

The NUJ anticipates that the redundancies could be finalised by the end of this week.

There were pickets and leafleting sessions early today outside the Warrington office, Northwich office and Sale office. NUJ members will also be out leafleting and raising awareness about the strike.

A team of strikers will be leafleting in different towns today including Knutsford and Crewe. The strikers will also be meeting in Warrington at lunchtime to discuss the next steps.

"Our members at Newsquest Cheshire and Merseyside voted 100 per cent in favour of strike action and the decision to go out on strike was backed unanimously at a chapel meeting last night.

"Company intransigence has left members with no other option than to strike and Newsquest management need to acknowledge the strength of feeling amongst staff and urgently get round the table and talk to the union."

"In refusing our request to hold off on making seven redundancies this Friday and instead allow for more talks to take place, Newsquest have sadly left our members with no choice but to push ahead with industrial action before any cuts are made.

"Newsquest Cheshire and Merseyside made £7 million pounds of profit last year so they have the money available to invest in quality journalism. They should not be sacrificing workers livelihoods and jobs."