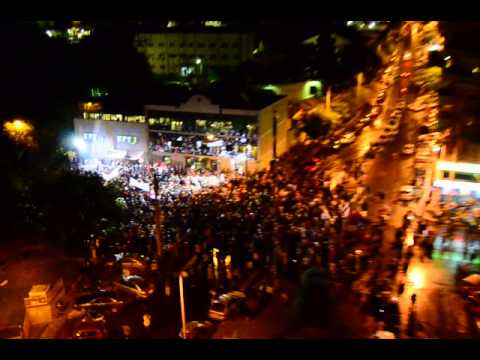 The NUJ joined international journalist organisations in condemning the Greek government for closing down its public broadcaster. The union sent a message of support and solidarity to the journalists now thrown out of work.

Employees at ERT were given very little notice when the government shut off its transmitters. However, they defied the attempt to shut them down and continued broadcasting online and on digital frequencies. Thousands of people gathered outside the organisation's headquarters in Athens to protest against the decision.

The Greek government announced that it will shut down the public broadcasting organisation's three TV stations, radio and regional radio stations, satellite emissions and internet portal and will fire a staff of approximately 2,700 people. It will reopen, but with a much-reduced staff.

In a message to the journalists and media workers assembled at ERT last night, Jim Boumelha, president of the International Federation of Journalists said:

"We are angry that you, your families and children, should be made to pay for a crisis that is not of your making. For many years, this crisis, caused by the greed and incompetence of bankers, businesses and politicians, has put at risk your standard of living, your wages and your pensions. Now it has taken away your livelihood.

"What happened to you breaks our hearts; it makes us angry, but most of all it makes us determined to fight alongside you. The message of the journalists of the world to your politicians and your bosses is loud and clear -- we will stand shoulder to shoulder with you to stop this madness and we will do everything within our power to get this decision reversed."

"This is a terrible decision. It is a direct assault on democracy at a time when the people of Greece need to be told what is going on. They need a reliable news source at this desperate time for the country and the economic situation as we observe the rise of dangerous far-right groups.

"The NUJ sends its support and solidarity to all the journalists who have been treated in this disgraceful way and we will be working with the IFJ to put pressure on the government to reverse its decision."

Messages of support came from NUJ members at the BBC.

David Campanale, chair of the BBC London branch of the NUJ, said:

"Broadcast journalists in the National Union of Journalists at the BBC in London send our solidarity and support to all our colleagues at ERT and to the Greek public staging protests in Athens against the closure. We stand with them in opposition to the Greek government's act of cultural vandalism.

"Public service broadcasters, independent from both the government and the commercial imperative, are the lifeblood of free and open societies. The decision to close ERT should have been subject to democratic debate and decision-making in Parliament – not through a shabby deal between two government ministers. It must be reversed."

The NUJ supported the demonstration on Wednesday 12 June 2013 outside the Greek embassy in Holland Park starting 17.00.

NUJ Dublin broadcasting branch will hold a demonstration in solidarity with Greek public service broadcasters on Thursday 13 June at 18.30 outside the Greek embassy on Pembroke Street (between Fitzwilliam Square and Leeson Street).

Please try and make it along to express your solidarity with fellow public service broadcasters in ERT.