NUJ campaigns against clampdown on media freedom in Hungary 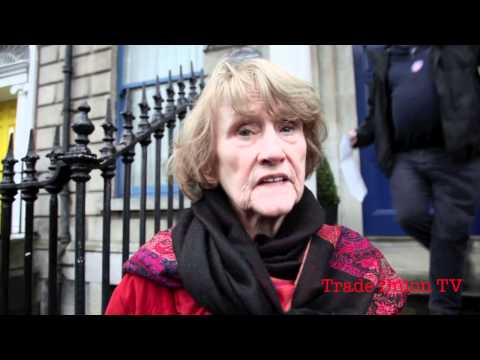 Barry McCall, NUJ vice-president, has handed in a letter to the Hungarian Embassy expressing concern at the clampdown on media freedom in Hungary. He told a gathering of journalists, trade unionists, students and members of Labour youth at the embassy that the NUJ is gravely concerned at the undermining of media freedom in Hungary and the relative silence of EU leaders in the face of a frightening erosion of civil liberties.

The NUJ has called on the Irish government to provide leadership at European level to end the attack on civil liberties in Hungary.

"Much has been made of the failure of EU states to meet fiscal guidelines. There has been an unacceptable silence on the shameful actions of the Hungarian government in attacking the right to free association, the right to organise and the right to freedom of expression.

"Since 2010, the Orban government has installed its own apparatchiks at MTV the national broadcaster, firing those who stood up to state censorship.

"The freedoms which are proported to be at the heart of the European Union have been trampled upon and continue to be undermined in Hungary. Ireland, through the Minister for Foreign Affairs must show leadership on this issue. We still retain our influence and our moral authority to speak on issues of fundamental importance to all the citizens of Europe."

The following is the text of the letter presented to the Ambassador:

Like them, we call upon the Hungarian government to respect the need for media pluralism:

While the NUJ is politically independent, our Code of Conduct obliges us to defend universal principles: pluralism, independence and the freedom of expression.

We note the view of Council of Europe Human Rights Commissioner Thomas Hammarberg last year that "the wide range of problematic provisions in Hungary's media legislation coupled with their mutually reinforcing nature result in an unfortunate narrowing of the space in which the media can operate freely in Hungary" and his recommendation for the comprehensive revision of the media law package.

This accords with the experience of the European Federation of Journalists during two missions to Hungary at the end of last year. The EFJ warned of a "perfect storm that threatens the future of independent journalism in Hungary".

Hungary's current approach to freedom of expression contradicts its commitments to media freedom, independence and pluralism under the European Convention on Human Rights. Already the Hungarian Constitutional Court has stricken down some provisions of the 2010 Media Law. The government needs to take note of international and domestic concern over these issues. The protests on January 2nd against the new constitution and repeated public opinion surveys show that the government cannot claim to have Hungarian public opinion behind its attack on media independence.

The NUJ is calling on the Irish government, current chair of the OSCE to raise this matter within that organisation and within the European Union. We are also calling on the European Commission to take due note of Hungary's international media freedom obligations in all current negotiations involving Hungary.