Journalists rally in Dublin in support of INN workers 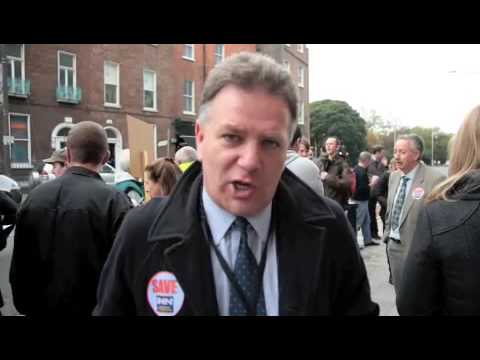 Journalists from national and regional media organisations gathered in Dublin on Tuesday for a lunchtime rally in support of Independent Network News workers who are threatened with redundancy. The board of INN is seeking to close down the radio news service on 30 October.

The NUJ is demanding withdrawal of the redundancy notices and, at the rally, Séamus Dooley, NUJ Irish Secretary, announced that the union has written to chief executive of the Labour Relations Commission Kieran Mulvey seeking an urgent Rights Commissioner hearing into the collective redundancies.

"The company has refused to engage with the NUJ, has refused to co-operate with the Labour Relations Commission and has failed to notify the Department of Enterprise, Trade and Employment of the collective redundancies.

"There are strong legal obligations on the employer which are simply being ignored. It is time that the Department took the gloves off and demanded that INN behave in an appropriate manner towards staff.

"The silence of the Minster for Enterprise, Trade and Employment, the Minister for Communications, the Broadcasting Authority of Ireland, and the Competition Authority in the face of this major threat to media diversity is deeply worrying."

Séamus Dooley strongly condemned the "look, no hands" approach of the Minister for Communications Eamon Ryan to the threatened closure of INN.

The proposed closure was announced on 1 October and Eamon Ryan broke his silence yesterday to issue what Séamus Dooley described as "a series of platitudes which give no comfort to staff".

"Mr Ryan appears to accept the closure of INN as a fait accompli and in fact he spoke of INN in the past tense.

"We have also challenged the company's failure to notify the redundancies to the Minister for Enterprise, Trade and Employment. We want the illegal redundancy notices withdrawn and we do not see this as a done deal.

"It is regrettable in his broadcast comments that Mr Ryan has made no reference to the fundamental issues arising from the planned closure concerning media diversity.

"The possibility of existing media monopolies wiping out INN is a matter of grave concern and the Minister for Communications, who has specific responsibility for broadcasting policy, cannot adopt a 'look, no hands approach' as if he were a mere bystander."