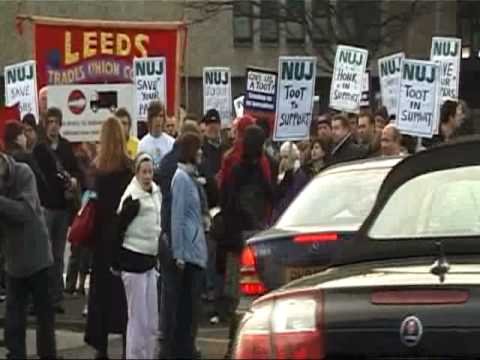 sfJournalists on Johnston Press's titles in East Lancashire are threatening to strike over proposed job cuts and editorial restructuring. NUJ members in Burnley, Nelson and Clitheroe are balloting for industrial action just a month after winning union recognition.

Johnston Press wants to restructure operations on the Burnley Express, Nelson Leader and Clitheroe Advertiser – and has asked for voluntary redundancies. Their colleagues in Leeds have already taken thirteen days of action over compulsory redundancies and editorial quality.

"This is the second set of proposals management have put forward.

"The chapel are worried it could lead to compulsory redundancies and make it impossible to run the papers to an acceptable standard.

"The chapel are adamant that they want to defend union members from compulsory redundancy and to defend editorial standards."

"The East Lancashire chapel have the union's full support as they stand up for journalists and journalism.

"It is excellent that having just achieved recognition they are using their new found collective strength to support each other.

"I hope others will be inspired by their example. The only difference between an editorial workplace with union recognition, and one without, is that in a company where we have recognition there has been someone prepared to volunteer to help with the process."