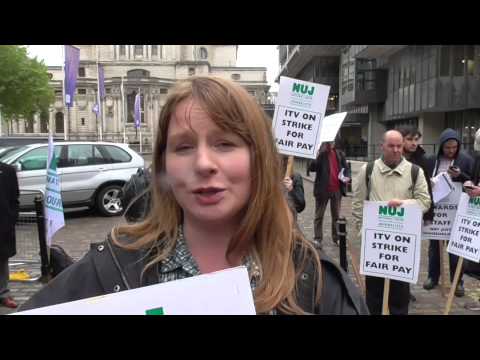 Messages of solidarity and support have been coming in for the NUJ, BECTU and Unite members at ITV on strike today. The strike coincides with ITV's AGM and is affecting TV programmes.

"I'll be outside the AGM this morning with other NUJ members sharing an open letter to shareholders to make sure we send a message loud and clear that your contribution has been a vital part of ITV's turnaround and you deserve to be properly rewarded for your hard work and commitment.

"This dispute is easily sorted out – ITV needs to get back round the table to negotiate a sensible deal.

"NUJ members have consistently delivered great journalism and content that is the bedrock of the company's success.

"The company's success is down to a team effort. Staff have stuck by the company during the difficult times, but it is unfair and insulting that when profits are soaring and the company is bullish about its financial future success, executives at the top are trousering huge amounts of cash while refusing to pay staff fairly."

Outside #ITV AGM in London #ITVstrike#unions#paypic.twitter.com/zeY1qeDaPd

"The TUC is proud to offer our 100 per cent support to striking NUJ, BECTU and Unite members at ITV. Workers in both private and public sectors desperately need a decent pay rise, and trade union members who feel they have no alternative but to take industrial action will always be able to count on the solidarity of the TUC. If we stick together and fight together, then we can win together."

"Like many of Britain's workers, ITV staff made sacrifices in hard times. But now things have picked up, they have every right to a fair share of growing revenue for their hard work."

Solidarity to talented and committed @bectu @NUJofficial & @UniteWales members on strike today as they stand up for fair pay. #ITVstrike

Sadly I won't be doing deals of the week on Good Morn Brit tomorrow due to ITV strike. As NUJ member I prefer not to cross picket lines.

#Solidarity to all Unite, @Bectu and @NUJofficial members across the country out on #ITVstrike for #FairPay today pic.twitter.com/5Ej0J86JWN

@unitetheunion @bectu @NUJofficial Solidarity with members in Dispute with ITV.

Profits up 23% to £712m & yet @ITV insists a 2% pay award is fair. We say no. @NUJofficial @unitetheunion #itvstrike pic.twitter.com/UIdXyu7Wzd

Solidarity with @NUJofficial and @bectu colleagues in their ITV strike today.

Solidarity with ITV journalists on strike today from Firefighters. If you fight, you may lose-if you don't fight, you will lose @NUJofficial

Solidarity with all involved in today's #ITVstrike @NUJofficial I won't be dealing with any media calls from ITV today. Fair pay please!

#Solidarity to all @unitetheunion @Bectu & @NUJofficial members out #ITVstrike for #FairPay today pic.twitter.com/TyPrS16iRT from our members

The @ITVCentral picket for #ITVstrike over pay outside the Gas Street studios in Birmingham @bectu@NUJofficialpic.twitter.com/unCzjXzk86

"The POA send a message of solidarity to NUJ members, Unite and Bectu members during their strike action for pay. ITV should treat their workers fairly in their pay demands."

"The NUT sends solidarity greetings to NUJ strike on May 14, alongside UNITE and BECTU members in defence of pay and conditions. We wish you early success in this campaign under the new government."

Lots of support at picket in Birmingham for #ITVstrike over pay @pbearneITV@ITVCentral@NUJofficial@bectupic.twitter.com/vZbWbP1nc7

Good on the ITV workers, no one should be 4% behind the cost of living @NUJofficial #ITVstrike

"We welcome the opportunity to send a message of solidarity, on behalf of all URTU members, to our brothers and sisters at the NUJ taking direct action on 14 May 2015."

@StatMone @bectu @NUJofficial Solidarity peeps! There with you in spirit.

"On behalf of all RMT members and the Union's Council of Executives I am writing to express our full support and solidarity for your industrial action taking place on Thursday. Please pass on to your members our congratulations for their determination to seek justice and our best wishes for a successful outcome to this dispute. In solidarity"

"PCS sends its solidarity to all workers on strike at ITV. It is your hard work that generates the company's success and the chief executive's soaring pay and bonuses. It is time the workers got a fair share too. Any victory in breaking this relentless pursuit of driving down workers' pay is a victory for all, so PCS stands fully behind NUJ, BECTU and Unite members taking action."

"Please accept this message of support from members and staff of PCS Northern Region, to all NUJ, BECTU and UNITE members at ITV taking strike action today over pay.

"There is no excuse for low pay rises in the 6th richest country of the world, and we salute the fighting determination your members have shown today.

"On behalf of PCS in the English Regions congratulations on your impressive industrial action today. If BoE Governor Carney is right profitable companies which continue to hold down pay constitute a serious risk to the economy.

"Solidarity in your fight."

"Strike action is not something we as trade unionist take lightly, but it is sometimes a necessary course of action. The 2% pay offer you received is pathetic, especially when considered against the true cost of living and the need for higher wages in order to stimulate the economy.

"We also know that low pay in one sector can often serve to drive and hold down pay for other workers in other sectors so you are not just making a stand for yourselves but for all. I wish you all the very best in your action today, and hope a better settlement is achieved.

"The BFAWU wish to congratulate our comrades in NUJ for taking the brave decision to strike against ITV in defence of their pay. We urge the directors of ITV to get back around the table for meaningful and progressive talks aimed at averting this disruption and resolving this potentially damaging action. We wish you every success in your deliberations against what would appear to be an intransigent employer. You can win. Solidarity from members, executive and officers of the BFAWU."

Plymouth Argyle have a huge game tonight. The Club President has cancelled an interview in solidarity with @bectu @NUJofficial ITV strike

"Solidarity for your strike today I can't join you, but am with you in spirit. We have a long fight ahead of us and holding hands with our sisters and brothers across the trade union movement is so essential to our success."

"A meeting of Brighton, Hove & District Trades Council last night asked me to send a message of support to ITV workers on strike today. Please can you make sure this reaches them."

"Sending you messages of support, respect and solidarity from all your friends at the joint chapels at Radio Leeds and Look North.

"The knowledge that what you're doing is right is, I'm sure, spurring you on.

"Hang in there. You're an inspiration to other trade unionists for the big battles that are to come."

"NASUWT’s 30,000 members in Yorkshire & Humberside pass on their support and solidarity for NUJ members engaged in the dispute with ITV over pay.

"It is simply offensive for some at the supposed ‘top’ of the organisation to be rewarded go generously whilst the rest of the staff are told they have to put up with derisory offers and are expected to accept it graciously. An organisation’s success is built on the hard work and effort of their workforce and ITV must understand that fairness and justice are central to that success.

"Sometimes the only response has to be industrial action if this fair treatment is being denied.

"We wish you the best in your push for a fair pay deal."

Support from members of parliament:

"Fraternal greetings to NUJ, UNITE and BECTU members, who by a huge majority have voted to be involved in industrial action on Thursday 14 May 2015. I would urge management at ITV to use common-sense and appreciate the strength of feelings of their workforce. They need to get back around the negotiating table; to recognise the massive contribution made by their workforce and to respond with a reasonable pay offer."

"Total support and solidarity with all those workers at ITV taking strike action for fair pay. If the company can pay its Chief Executive a bonus of £8.4 million it can afford to give its workers a pay rise which reflects costs of living increases."

"Solidarity and respect to all ITV workers striking tomorrow. Over the last few years staff have remained fiercely loyal to ITV despite the stagnation of wages, job losses and the resultant vast increase in work loads. Recent reports now show that the company is now financially secure and this has been reflected in top level pay packages over recent months.

"It would certainly be morally fair to expect that increases at the top be reflected across the rest of the workforce to some degree so that it is clearly evident that hard work and loyalty are appreciated. I have no doubt that ITV do wish to reward hard work and to this end I would hope that ITV works with unions and staff to reconsider the current pay increase which has been suggested."

Many thanks to MP @RLong_Bailey for her support today as we campaign for fair pay #ITVStrike@NUJofficialpic.twitter.com/qCFDUEZsJn

Cancelled my interview with @itvwestcountry tonight in support of @bectu and @NUJofficial Members on strike. Good luck all! #solidarity

Solidarity to @NUJofficial @unitetheunion @bectu members on strike today, esp those in the rain in Wales! #ITVstrike #DefendTheRightToStrike

Strike day updates, pictures and messages of solidarity and support can be sent to campaigns@nuj.org.uk

NUJ, BECTU and Unite members at ITV will are on strike on Thursday 14 May. The strike will coincide with ITV's AGM and will affect TV programmes.

The dispute is in response to a 2 per cent pay offer from the company.

There are more details about the ITV pay dispute on the dedicated pages of the union's website.

Hashtag for the strike day is #ITVstrike

Send messages of solidarity and support via email: campaigns@nuj.org.uk