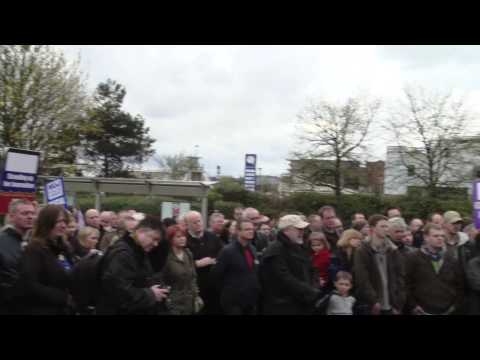 Journalists at the Glasgow-based Daily Record and Sunday Mail are preparing for a substantial escalation in industrial action. This follows last week's second 24-hour stoppage in the campaign against compulsory redundancies.

Hundreds of workers from both papers were joined by three Glasgow Members of the Scottish Parliament (MSPs) for a rally outside the papers' headquarters on Friday 10 April. They included former Daily Record industrial correspondent turned-politician, David Whitton MSP.

He told chapel members and other supporters:

"Journalists are showing the way forward for wider workers in Scotland and the UK that tacking action is exactly the right thing to do."

More strike days are now scheduled for 17 and 18 April.

The chapel is also resisting plans to force through an unpaid increase in working hours, as well as damaging cuts to the Trinity Mirror pension scheme – all on top of the group-wide pay freeze.

The campaign has galvanised the union and brought new confidence and purpose to chapel activists.

As Shadow Culture Secretary, she says it is not acceptable for management at Trinity Mirror, and also at the nearby Newsquest-owned Herald, Sunday Herald and Evening Times, to conduct their business and treat staff as they have done.