BBC journalists and colleagues on strike over job cuts and bullying 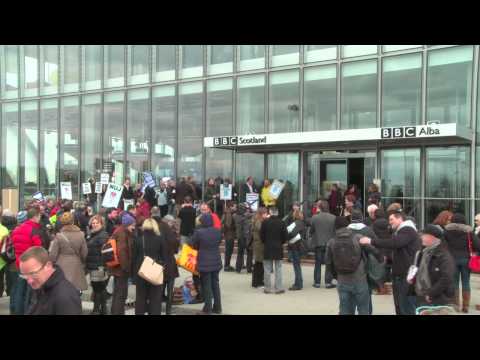 BBC journalists and their colleagues walked out at noon on the Thursday before Easter in a 12-hour strike against a damaging cost-cutting scheme imposed by management. The action severly disrupted the BBC's schedules and had a knock-on effect on Easter programming.

BBC NUJ members went on strike together with technicians and other members of broadcasting union Bectu over compulsory redundancies, excessive workloads and bullying and harassment within the corporation.

The BBC News and BBC World channels both switched to a pre-recorded broadcast at 12:00 when the strike began. Both channels later broadcast a mixture of live news bulletins and pre-recorded programmes. A shortened One O'Clock News was broadcast at 1pm while there was no World at One on Radio 4.

Eddie Mair's PM was swapped for a repeat of Saturday's Archive on 4 – DNA 60 Years On. The World Tonight was replaced with a repeat of Loose Ends.

The action is a consequence of the BBC's so-called Delivering Quality First (DQF) initiative, a cost-cutting programme which will result in the loss of 2,000 jobs across the corporation. The strike will affect BBC sites across the UK. All NUJ and Bectu members are also observing a work to rule.

On the picket line at BBC Radio Oxford © Private

No output from BBC Foyle © Private

On strike at BBC Hull © Private

Michelle Stanistreet, NUJ general secretary, was with her members as they left the newsroom at New Broadcasting House, London. She congratulated the BBC members and said that the union regretted having to call the strike. She said:

"The impact of the cuts has meant that members are struggling to be able to get their work done and to maintain quality output. The BBC has a special role as a public sector broadcaster and it is the people who work here – not those who are running the BBC – who are passionate about doing a good job."

"This should send a strong message to Tony Hall, the incoming director general, that we have to put a stop to the cuts so we can sit down and have a proper discussion to address the issues. We cannot have a situation where members are paying for the BBC's cuts with their health.

"Yesterday, we had the report on the death of our member Russell Joslin and the failure of the management to deal with the harassment he suffered. We are now waiting for Dinah Rose's review on the corporation's processes relating to bullying and harassment. The NUJ sent a document of more than 120 pages and on every one page were accounts of bullying that had remained unchecked for some many years."

"The total support for the strike in Scotland should send out a powerful message to the management that we are not prepared to put up with the level of mismanagement over the cuts. That is why we are all outside today. We are now looking forward to a new management and culture under the new director general Tony Hall. We desperately need a management and culture to stop the decline in the working conditions to which our members are subject."

The strike was an immediate success affecting programming across the BBC.

TUC general secretary Frances O'Grady and many union leaders in the UK and elsewhere have joined the chorus of support for the strike action being taken by journalists and other BBC workers in support of public service broadcasting and fair employment. You can read their messages of support below.

"Members are taking strike action in a clear message to the BBC that it needs to listen to its staff and address properly the problems created by its ill-conceived and badly implemented cuts programme. It is disappointing that once again the BBC has decided not to properly engage with us, refusing our call for a moratorium to give space for meaningful discussions on the worrying impact of the cuts. The DQF plans remain on the table, regardless of the consequence for workload and stress levels.

"We need Tony Hall to come in as director general with a big broom to sweep away management complacency and set new priorities. Events in recent months have made clear that the BBC management is in turmoil. The new DG needs to have a new start – to put the disastrous decisions made by Mark Thompson and the lack of leadership of George Entwistle behind him and have a major rethink of DQF.

"We know that the cuts are already having an impact on the quality of work. We know that it is leading to unacceptable workloads and stress. We know that management is using DQF as a means to harass and bully staff – making worse an already entrenched problem of bullying that has been largely ignored by those in positions of power."

Under DQF the BBC will cut its budget by 20 per cent, resulting in 2,000 job losses, many from core programming. The BBC has already lost more than 7,000 jobs since 2004. This is because former director general Mark Thompson agreed to freeze the BBC licence until 2017 while taking on an extra £340 million in spending commitments, including funding the World Service and roll-out of fast broadband.

You can download an A5 flier here and an A3 poster by clicking here.

"On behalf of the TUC, I want to offer our strong support to colleagues in the NUJ and BECTU taking action to defend jobs and quality services at the BBC. Time and time again the public have shown that they value the vast range of services provided by the BBC. They regard the licence fee as excellent value for money. These cuts are being imposed by a weak management that is not prepared to stand up to an ideologically driven government."

"I am writing on behalf of Napo to offer our solidarity and best wishes as your members take strike action against job cuts and worsening terms and conditions. It is becoming increasingly clear that this Government are determined to carry out the most blatant attack on decent hard working people that we have ever seen and portray the public sector as the problem while their ill-conceived economic policies lead the British people further towards social disaster.

"The URTU sends fraternal greetings and support for our comrades within NUJ, on the 28th March, in their dispute over job cuts, excessive workloads and bullying. We wish them every success in their struggle".

"I offer full support and solidarity for your action tomorrow on behalf of PCS members, the vast majority of whom were on strike last week over cuts to their living standards, jobs and working conditions and are involved in further walkouts and protests in the coming months.

"The BBC is one of our country's finest institutions, which touches all our lives every day of the week. Instead of cutting jobs and resources to the bone, politicians and senior managers should be investing in the corporation and its hard-working staff - your members - to improve programmes and the quality of broadcasting."

"The National Union of Teachers sends solidarity greeting on the occasion of your strike today. Please convey our greetings to colleagues from BECTU, too. We stand with you in your determination to defend jobs and services."

"On behalf of ASLEF members, I wish to convey our solidarity with the NUJ members employed by the BBC who will be striking today. Our best wishes for a satisfactory outcome to the dispute over compulsory redundancies, excessive workloads and bullying and harassment within the corporation."

All out in Salford © Private

Dimitris Trimis, President of the Journalists' Union of the Athens Daily Newspapers, said:

"On behalf of the Journalists' Union of the Athens Daily Newspapers members I send message of support and solidarity with colleagues striking in the BBC defending journalism as a public good and struggling for decent working conditions.

"BBC colleagues, Athens journalists share your struggle. Since last February, members of the Journalists' Union of Athens Daily Newspapers are also struggling against downsizing Greek public broadcaster ERT and the loss of journalists' jobs thus resulting substantial damage in quality of the programme provided. It is our duty not to allow the deconstruction of public service broadcasters in Europe and stand in solidarity with all colleagues fighting for decent working conditions to upgrade quality of news information provided to public opinion."

"Please pass on the best wishes for a successful day and solidarity for NUJ members from the MU and its members."

Australia's industrial and professional journalists' association, the Media, Entertainment & Arts Alliance, extends its full support in solidarity with colleagues across the United Kingdom who are striking over job cuts, excessive workloads and bullying at the British Broadcasting Corporation (BBC). Christopher Warren, federal secretary of the Media Alliance, says:

"Our colleagues at the BBC are taking this action not in a fight for better pay or conditions but because they know public broadcasting is something to be cherished in a healthy democracy. They are taking this action on behalf of all of us because they believe in everything the BBC stands for. The BBC is the vanguard of presenting high quality journalism and programming for audiences around the world and it sets an example for countless others to emulate"

Read the full statement from the Australian Media Alliance.

There is support, too from the German journalists' union dju in ver.di. General secretary Cornelia Haß writes:

"The members of german union of journalists – dju in ver.di – are very concerned about the situation you face.

"Be sure: Not only in Great-Britain but on the whole continent journalists know that the BBC has been a European-wide and world-wide reference for public broadcasting. Now the ones working there face ill-conceived and badly implemented cuts programme.

"We fully agree to EFJ (European Federation of Journalists) – President Arne König who stated: "This is a key battle not only for the BBC but for all what public broadcasting represents for journalists in Europe.

"It is high time to defend the quality and independence of the BBC and to avoid job cuts and fight for decent working conditions."

"Please accept our full support from all the FBU members in Norfolk. Once again we find another organisation which is cutting the workforce and making people's working conditions worse. Everyone must stick together and in the end we will all win. Good luck in your fight."

"We send our greetings to you as you take action, again, in your struggle to save jobs, protect your terms and conditions and stand up for public services. We stand together with you. As you will be aware we are also in dispute. We are refusing to be made to pay for a crisis that was not of our making. There is an alternative. United we will win."